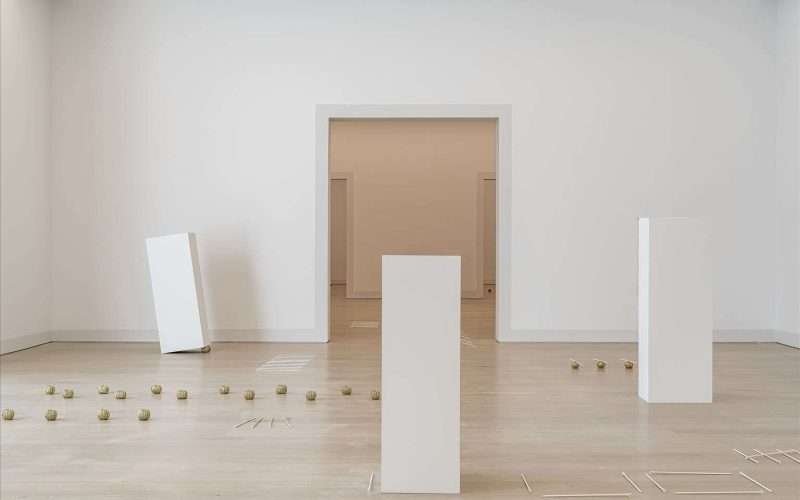 When I hear music, I can almost touch it.

It is soft or hard, heavy or light, bright or dark.

I perceive the space which music creates.
— Füsun Onur

One of the pioneers of contemporary art in Turkey, Füsun Onur’s installation Opus II – Fantasia from the Arter Collection carries references to music, as is the case with many of her works. Deploying everyday, fictional, and even autobiographical elements to explore form, space, time, and the relations among them through an exceptional variety of materials, Onur approaches music as a process that engages multiple senses. In the installation, she uses four ordinary objects as the medium and elements of music, interpreting space and time through rhythm and variations. The forms and motifs which emerge from the rhythmic appearances of and encounters between the white knitting needles, balls of gold braid, small porcelain figurines, and standard museum plinths proliferate and vary with pauses and crescendos, composing a visual music that makes reference to and rearranges the exhibition space.

Opus II – Fantasia was conceived by Füsun Onur in 2001 for the exhibition Aus der Ferne so nah [From Far Away So Close] at the Staatliche Kunsthalle Baden–Baden. The artist then created different rearrangements of the work for the group exhibitions Tactics of Invisibility (2011) at Arter, and Border of Time (Saum der Zeit, 2018) at Neues Museum Nürnberg.

The artist illustrates its first presentation in Germany as follows:

This piece is envisaged as a monologue by a single instrument: like an organ. It starts with knitting needles widely spread out on the floor. At first lined up, then at angles, criss-crossing each other. Soon the second element (gold braid) appears, accompanying or rather attaching themselves to the brooding knitting needles. A pause, and then the third element, the plinths, burst in abruptly. Then again, the knitting needles form various motifs amongst themselves and expand. Then burst and silence. […] The variations and repetitions continue with small movements, almost unnoticeable, in a low pitch too. […] In another section, we are thrilled with the arrival of a new colour. A small blue-white figurine meets the coiled golden ball. The golden ball unfurls part of its coils, extending it to the figurine. […] The same underlying impulse runs through the entire structure […] sometimes drifting astray, or falling silent. From time to time bursting, but all through timid, unrelieved with monotonous modulations.

The notions of space and time, of light and shadow, of sound and silence continue to feature in Füsun Onur’s artistic practice which has been shaped over the past half-century within the enchanting world of the house where she was born and still lives. A significant number of the works produced over different periods of the artist’s career were featured at Arter in the retrospective Through the Looking Glass (2014), an exhibition curated by Emre Baykal and accompanied by a comprehensive publication on the artist’s oeuvre. Onur is currently preparing a new work for the Pavilion of Turkey at the 59th International Art Exhibition of the Venice Biennale which will be held in 2022.